Falling Away into a Way of Awakening


imaṃ parikaraṃ sarvaṃ prajñārthaṃ hi munir jagau |
tasmād utpādayet prajñāṃ duḥkha-nivṛtti-kāṅkṣayā ||BCV9.1||
All this groundwork the Sage did preach
Only for the sake of wisdom.
So may it be cultivated
With the wish that sorrow should cease.

tatra loko dvi-dhā dṛṣṭo yogī prākṛtakas tathā |
tatra prākṛtako loko yogi-lokena bādhyate ||BCV9.3||
The world, then, clearly has two types:
Men of practice and commonfolk,
And the world of the common man
Is assailed by the yogi's world.

This as I read it forms the opening section of chapter 9. From verse 7, depending on how one reads that verse, the chapter consists of objections by opponents and responses to those objections. For a translator it is a minefield into which, for the moment, I hesitate to tread.


The three words which make up the 3rd pāda of verse 2, buddher agocaras tattvam, can be translated in any number of ways. The discipline of sticking to eight syllables led me to translate above Beyond the mind's grasp, is what is. Whatever the English translation, the point is that reality is beyond the scope of our human intellect, however intelligent we might be.

Lionel Barnett's translation (1909) is published here by the University of Oslo's TLB. Barnett has:
The Reality is beyond the range of the understanding.

Parmananda Sharma's translation (1990) has:
Reality or 'tattva' being unattainable by intelligence...

The translation by Vesna and Alan Wallace (1997) has:

Ultimate reality is beyond the scope of the intellect.


Thus, when it came to  buddher agocaras tattvam, my impression is that Śāntideva stated the case so clearly that, in the spirit of hitting a barn door with a banjo, none of the above translators missed the target, but each hit it in his or her own way.

buddher agocaras tattvam.
Reality is beyond the scope, beyond the grasp, out of the range, of our human intellect.
In this statement, my Zen teacher Gudo Nishijima -- who liked to paint with a broad brush -- used to emphasize, is the whole of Gautama Buddha's teaching.

How to realize that teaching is the question.

Or perhaps the question is better put: How to let that teaching realize itself?
(Not so much "My will be done," then, as "Thy will be done.")

How to prevent our human ignorance from hindering that teaching which is always waiting to realize itself.

To guard against such intellectual arrogance, my teacher recommended pulling in the chin so as to stretch the back of the neck.

This, ironically enough, turned out to be another variation on the theme of ignorance.

This is the backround against which, sooner or later, one way or another, by hook or by crook, I would like to clarify how I have come to understand Nāgārjuna's words (MMK26.10) that
saṁsāra-mūlaṁ saṁskārān, avidvān saṁskaroty ataḥ.
"The doings which are the root of saṁsāra thus does the ignorant one do."

Or, alternatively, using a more conventional translation of  saṁskārān:
"The karmic formations at the root of saṁsāra thus does the foolish one form."

Śāntideva lived in India in the 8th century AD, five or six hundred years after Nāgārjuna lived in India, and two or three hundred years after Bodhidharma went to China. So Śāntideva was active at the great centre of learning at Nālandā in India at the time when the successors of Bodhidharma were vigorously engaged in exercising the Buddha's wisdom, during the golden age of Chinese Zen, in Tang Dynasty China.

The line passing from the Buddha through Nāgārjuna to Bodhidharma, as Dogen transmitted it from China to Japan in the 13th century, includes other celebrated Indian teachers like Kanadeva (aka Āryadeva; no. 15) and Vasubandhu (no. 21), who preceded Bodhidharma, but this line naturally does not include Śāntideva who lived in India two hundred years or so after Bodhidharma left India for China.

Nevertheless, there are a couple of motivating factors encouraging me to study Śāntideva's poetry, as part of the kind of spadework that I like to do, feeling -- very possibly with a vanity born of ignorance -- that such spadework might eventually be useful for others.

First, the Dalai Lama and his students evidently hold Śāntideva in the highest regard as an explicator of Nāgārjuna's teaching. Thus in a 1988 foreword to a translation of Śāntideva's Bodhi[sattva]cāryāvatāra (or "Entry into the Bodhisattva's Way of Life"), DL wrote:


In this masterpiece, the author, who belonged to he Madhyamika school of Nagarjuna, describes in detail the conduct of a bodhisattva, one who aspires to attain supreme enlightenment or Buddhahood for the benefit of all other sentient beings. Acharya Shantideva himself was a bodhisattva, who, while strictly observing the code of monastic discipline, was inwardly a realized tantric adept. Bodhisattvacharyavatara was clearly derived from the author's conduct of his own life, and it is its essentially practical nature that gives the book its universal, timeless appeal.

Second, a few months ago I came upon this website, bodhisvara.com, which features a recitation of the whole of  Śāntideva's great poem by Kashinath Nyaupane, Head of the Department of Buddha's Teaching (Bauddha Darshana) at the Nepal Sanskrit University, For several years I had hoped to find such a recitation, preferably of Aśvaghoṣa's poetry, to parrot out loud. This recitation by Prof. Nyaupane, even though it is the poetry of Śāntideva and not of Aśvaghoṣa, still fits the bill perfectly.

So I have started memorizing Śāntideva's poetry verse by verse, as I did for Aśvaghoṣa's two epic poems, except this time with more attention to the cadences and pronunciation of the original, as beautifully rendered by a natural Sanskrit speaker.

When I first translated it, in the more literal style that I adopted for Aśvaghoṣa's epic poems, the first verse in BCV chapter nine came out like this:

All this preliminary teaching the Sage sang out for the sake of wisdom./
Therefore let wisdom be caused to emerge, with the wish that suffering should cease.//

Then, over a matter of days as I memorized and recited the original, parrotting Prof. Nyaupane, and being mindful of Ānandajoti Bhikkhu's example in translating Pāḷi verse, I decided to impose on myself the discipline of mirroring the original Sanskrit's śloka metre, according to which each of four pādas has eight syllables. The end result was this:

imaṃ parikaraṃ sarvaṃ prajñārthaṃ hi munir jagau |
tasmād utpādayet prajñāṃ duḥkha-nivṛtti-kāṅkṣayā ||BCV9.1||
All this groundwork the Sage did preach
Only for the sake of wisdom.
So may it be cultivated
With the wish that sorrow should cease.

As a translation of parikaram, on reflection, I do like groundwork.  Groundwork first sort of forced itself on me as representing a saving of five syllables over "preliminary teaching" and a saving of two syllables over "preparation" -- wherein the secret surely lies.  But gradually groundwork began to grow on me. Digging, after all, is one of my favourite things, both metaphorically and -- particularly in the growing of winter radishes -- literally. 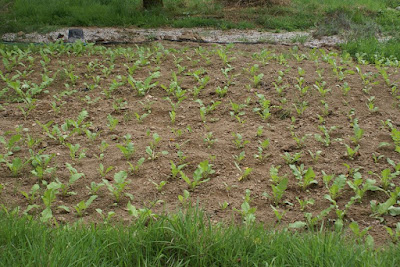 Parikaram according to the dictionary means "what helps or assists; attendants, followers, entourage, retinue, train." What Śāntideva meant by parikaram, in context, was the content of the previous eight chapters covering the Bodhi-mind, and the other pāramitās. He was emphasizing that the one great purpose, as the Lotus Sutra also emphasizes, is the Buddha's wisdom, prajñā-pāramitā.

This wisdom, the second verse emphasizes, is no more amenable to intellectual understanding than darkness and drought are amenable to the growing of winter radishes.

On those grounds, may the wisdom of the Buddha -- as propounded by Aśvaghoṣa, Nāgārjuna, Kanadeva, Vasubhandhu, Bodhidharma, and the Zen masters of China and Japan -- be cultivated. And here's hoping that the cultivation may be aided rather than hindered by another load of old manure from me.