kātyāyanāvavāde cāstīti nāstīti cobhayam |
pratiṣiddhaṃ bhagavatā bhāvābhāva-vibhāvinā ||MMK15.7||
In The Instructing of Kātyāyana, both “It exists” and “It does not exist” are denied by the Glorious One who clarified the existence of existence and non-existence.

In MMK chap. 15, Nāgārjuna thus makes explicit reference to the teaching which is recorded in Pali in Kaccāyana-gotta-suttaṁ (Saṁyutta Nikāya, 12.15), The Discourse to the One from the Kaccāyana Clan.

A comparison of existing translations can be found here.

Kaccāyana-gotta-suttaṁ (SN 12.15)
The Discourse to the One from the Kaccāyana Clan

Evam me suttam.
Thus have I heard:

Loka-samudayaṁ kho, Kaccāyana, yathābhūtaṁ sammappaññāya passato, yā loke natthitā sā na hoti.
Whatever It-does-not-exist-ness there is in regard to the world, Kaccāyana, does not occur to one who, with nothing but wisdom, sees the arising of the world as it really is.

Loka-nirodhaṁ kho, Kaccāyana, yathābhūtaṁ sammappaññāya passato, yā loke atthitā sā na hoti.
Whatever It-exists-ness there is in regard to the world, Kaccāyana, does not occur to one who, with nothing but wisdom, sees the arising of the world as it really is.

Tañ-cāyaṁ upayupādānaṁ cetaso adhiṭṭhānaṁ abhinivesānusayaṁ na upeti na upādiyati nādhiṭṭhāti: ‘Attā me’ ti.
But this one [who sees straight] does not tend to join in and become attached, does not tend mentally to take a position, does not tend to identify and unconsciously go along with; he neither attaches to [the view], nor takes as a position, that “I have a self.”

na kaṅkhati na vicikicchati,
he does not doubt, is not uncertain;

Avijjā-paccayā bhikkhave saṅkhārā,
With ignorance as their causal grounds, monks, there are habitual doings;

phassa-paccayā vedanā,
with contact as its causal grounds – feeling;

taṇhā-paccayā upādānaṁ,
with thirsting as its causal grounds – taking hold;

upādāna-paccayā bhavo,
with taking hold as its causal grounds – becoming;

Avijjāya tv eva asesa-virāga-nirodhā saṅkhāra-nirodho,
But from the complete fading away and cessation of ignorance, there is the cessation of habitual doings;

Atthitā: -tā is the feminine abstract noun suffix ("-ness").  So atthi ("[it] exists") + tā means something like "it-exists-ness" -- that is, the view or the attitude or (as Gudo Nishijima would have said) the state [of the autonomic nervous system], in which things like an action, or karma produced by action, or the world, have real independent existence as things unto themselves. Because such things are immune to dependent arising and ceasing, this extreme is also called "eternalism"  (sassatavāda / sassatadiṭṭhi; [Skt] śāśvata-dṛṣṭi).

Natthitā: "it-does-not-exist-ness." Sanskrit equivalent: nāstitva. Also called "annihilationism" (Pali: ucchedavāda; or [Skt] uccheda-dṛṣṭi). The Buddha's teaching of dependent arising negates the separate existence of things but affirms, in the middle way, that things do exist through dependent arising.  Natthitā, in contrast, is the extreme nihilistic view (or attitude or state) which, ideals having been shattered and disillusionment having set in, asks the rhetorical question: "Since everything is empty, what is the point of anything?"  Nāgārjuna will respond by clarifying that all movement in the right direction is possible only because everything is empty. What the nihilist means by "all is empty" is "all is futile," or "nothing has meaning." What Nāgārjuna means by "all is empty" is that every thing is dependently arisen, and therefore empty of separate existence as a thing unto itself. And precisely because all is empty in this sense, our efforts to get to the bottom of the four noble truths can be meaningful.

Upādāna: attachment, taking hold, clinging – as per link no. 9 in the 12-fold dependent arising of suffering. Bhikkhu Bodhi: clinging.

Abhinivesa = Skt. abhi-niveśa: application, intentness, affection, devotion; determination (to effect a purpose or attain an object), tenacity, adherence to; from abhi-ni-√viś: to enter ; to disembogue (as a river) into; to devote one's self entirely to. Bhikkhu Bodhi: adherence.

Adhiṭṭhāna = Skt. adhi-ṣṭhāna: standing by; position; (with Buddhists) steadfast resolution (one of the 6 or 10 pāramitās). Bhikkhu Bodhi: standpoint. Thanissaro Bhikkhu: fixations [of awareness].

Anusaya = Skt. anuśaya: close connection as with a consequence, close attachment to any object; from anu- √śī: to sleep with, lie along or close, adhere closely to. Bhikkhu Bodhi: underlying tendency. Thanissaro Bhikkhu: latent tendencies.


Saṅkhārā = Skt. saṁskārāḥ. Thanissaro Bhikkhu: fabrications. Maurice Walshe: the formations. Bhikkhu Bodhi: volitional formations. Ānandajoti Bhikkhu: [volitional] processes. But cf. Nāgārjuna's usage in MMK chap. 26, where saṁskārāḥ are described as what the person engulfed in ignorance contrives to do. See also the traditional depiction of the 2nd link as a potter manufacturing pots. Cf. also the standard Chinese translation as 行, which means to act, but originally (as represented by the track-like pictograph) in the sense of going along established tracks. Hence I translate "habitual doings" or "doings." So far nobody recognizes that translation. But one day everybody will, because "habitual doings," I strongly believe, is the real meaning. 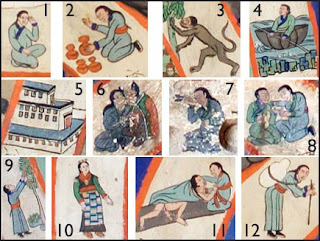 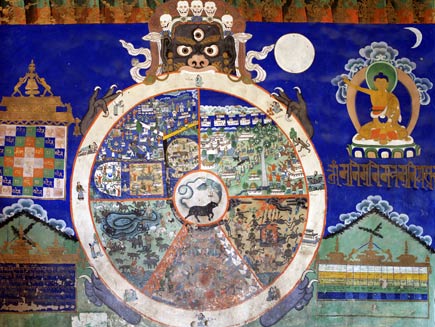